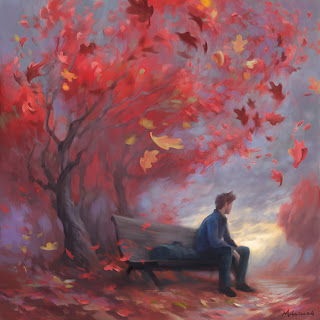 I did this almost a year ago but didn't post it because it felt like the time for posting fall colored  pictures had passed. But it's fall again so I'll post it now. So last year in the digital painting class I teach we did the assignment where you illustrate a piece of music. I told them they could do a narrative of the lyrics or just try to capture the feeling of the music itself. I decided I wanted to do the assignment too, so I did this based on the song "Landed" by Ben Folds. That song has elements of sadness, hope, excitement and emptiness all rolled into one, and it's in the music, not just the lyrics. I wanted to try and capture the way that music makes me feel in an image.  I don't know if it really worked, and for that matter, I don't know if visual imagery can ever move people as powerfully as music can, but music can certainly paint a picture in my head. And my class came up with some really good stuff on this assignment so it must have been a good exercise.
6 comments: