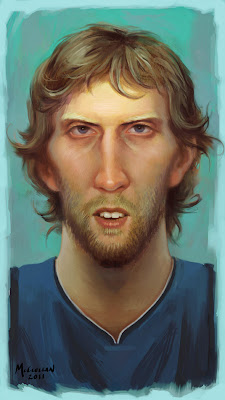 The NBA finals start tonight, and I might actually watch this time since the Lakers aren't in it. And since Dirk and the Mavericks were the ones to dispatch the Lakers, I hope they win. Unfortunately, I don't think they will because as I was working on this portrait of Dirk, my wife said, "Oh, are you drawing Jon Heder?" And although that was probably just because of some drawing errors on my part, I realized that no one who could ever be mistaken for Napoleon Dynamite is going to beat LeBron and Wade.

From this morning's life drawing session 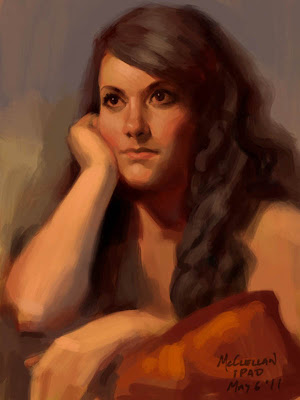 Done on the iPad, using the Brushes app, two hours. I like this one much better than my last few of attempts on the iPad. Painting on the iPad is fun, but it's a fight. I remember watching the documentary "It Might Get Loud" a while back and hearing guitarist Jack White talk about how he feels like playing his guitar should feel like a battle, and he's trying to conquer it. That's kind of what painting on the iPad feels like to me, and maybe that's why I haven't given up on it yet.
7 comments: